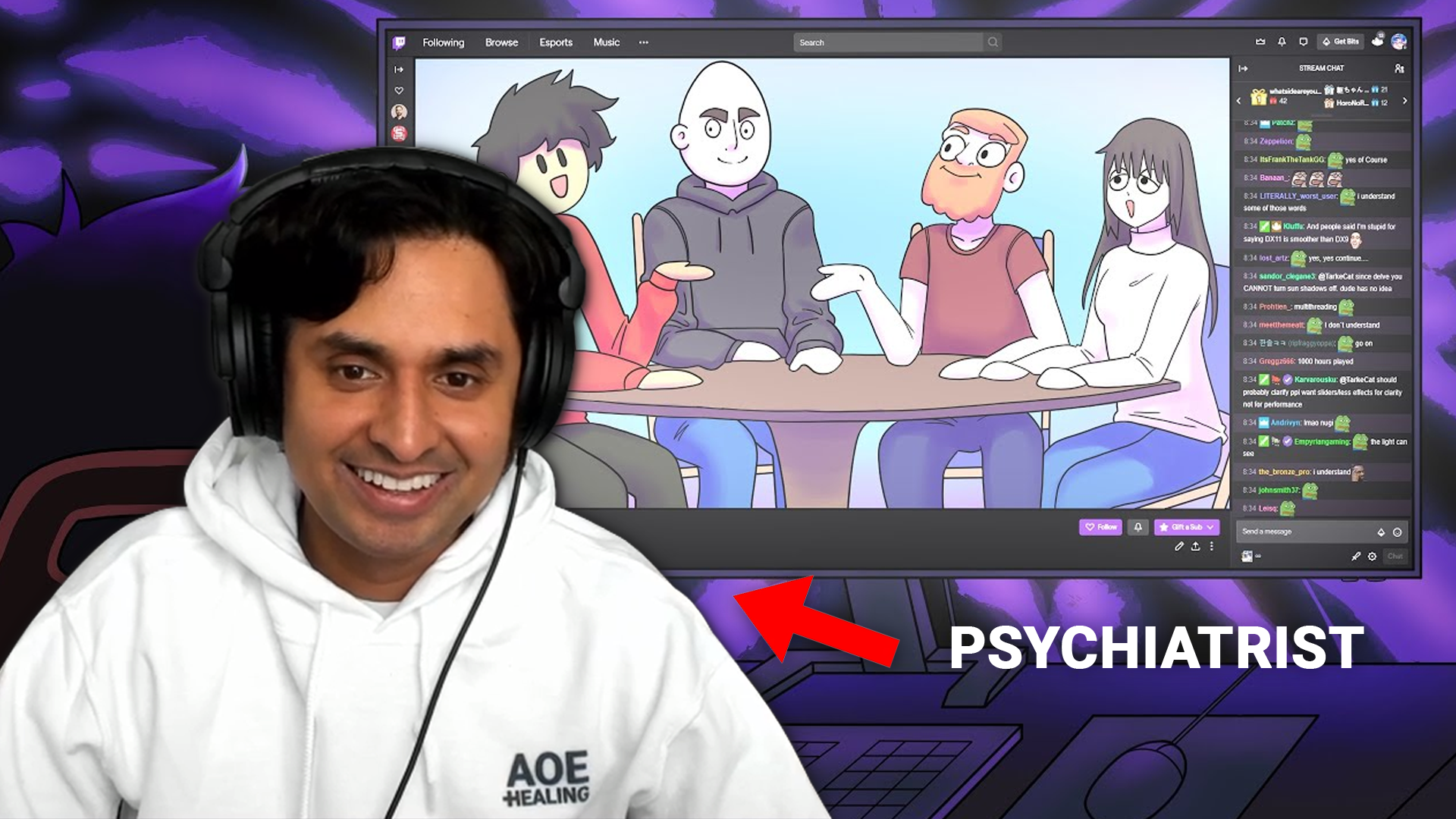 Twitch is the biggest streaming platform, boasting over 15 million daily active users as of 2020. Parasocial relationships on Twitch have become a concern for both streamers and viewers alike. In this article, Dr. Alok Kanojia, a psychiatrist who streams on Twitch to an audience of thousands, weighs in about the mental health ramifications of parasocial relationships between streamers and viewers.

Parasocial relationships on Twitch are one-sided psychological bonds between a streamer and a viewer, where the audience feels intimately connected to the broadcaster without the feelings being reciprocated. The audience often shares intimate details about their lives and donates small amounts of money to get their attention. To the streamer, the viewers are simply names that rapidly scroll by in the chat box.

What are Parasocial Relationships?

Parasocial relationships on Twitch are almost identical to a fan's relationship with a celebrity. Some fans are simply interested in the celebrity's work, whereas others are quite obsessed with their daily lives.

Since parasocial relationships on Twitch are a relatively newer phenomenon, many studies haven't been done on the topic. However from a psychological perspective, the mechanism through which they work is not exactly new.

In our evolutionary history, a tribe tended to have a leader or a hero who had accomplished a difficult task. The tribe would respect them and go to them for help, advice, and guidance. Since the size of the tribe was small, most individuals had the opportunity to meet the person and get to know them. It would be a two-way relationship.

The closest thing to a parasocial relationship before radios and television would be the relationship between an author and their readers. However, with the advent of radio and television, individuals started becoming entertainers to a massive audience they would not have been able to reach otherwise. Their viewers started to put them on a pedestal and sometimes confused the entertainer's performances with their real identity. However, it was relatively hard to make that mistake because the entertainer would only show up on their screens for about an hour every week, or at most, an hour every day.

Twitch has changed that landscape. Most of the top Twitch streamers stream for many hours a day, which exposes their private life to the public. Their viewers end up getting a view into their life that is usually reserved for a person's family and closest friends. Unsurprisingly, when you spend over 12 hours a day with a person, your brain cannot help but form a relationship with them. Human beings are social creatures, and our brains have evolved to form bonds with the people we spend the most time with. Parasocial relationships on Twitch develop because the pace of technology has outpaced the process of evolution, and our brains have not yet adapted to this new phenomenon.

Parasocial relationships are pretty normal on Twitch. Many streamers talk about receiving messages where viewers share their struggles, stories and even ask for money and advice. Streamers often find themselves in situations where they want to help but don't know how to.

"In the DMs people send me, it feels like I'm not the guy for the job. They ask me for advice as they would a friend, or someone you're close to. But I'm not involved in the person's life." - Ludwig Ahgren, a Twitch streamer and YouTuber.

"One of the reasons someone reaches out to streamers for help is that they know they won't get a response. People would rather take chances that have a high likelihood of failure than take those that have a slightly higher chance of success", says Dr. K, a Harvard-trained Psychiatrist who streams on Twitch.

Celebrities have reported receiving fan mail for several years and get asked to give life advice all the time. There is a general idea in our society that if a person is rich, successful, and famous, they probably know how to make life decisions. This value judgment is not necessarily right or wrong, but it is the motivation behind much of the parasocial behavior that we see on Twitch.

"At the end of the day, the streamer's there to put on a show and be entertaining and be there for somebody, not necessarily a pillar in someone's life [...] I make it pretty clear with my community that this kind of parasocial relationship with somebody is not really healthy." -Charlie aka. penguinz0/moistcr1tikal in a conversation with Dr. K.

Why are Parasocial Relationships bad?

Parasocial relationships aren't necessarily bad. However, much like any other relationship, they can cross boundaries. In 2020, Sweet_Anita, a popular Twitch streamer, came forward with her story of being stalked relentlessly. She reported that her stalker waited outside her house, followed her home, and threatened her, her mother, and her pets with bodily harm. While stalking is one of the more extreme cases of parasocial relationships gone wrong, it is unfortunately a common phenomenon, especially with female streamers.

"There's nothing wrong with connecting with a streamer, that's oftentimes how you find a community." Charlie, aka penguinz0, goes on to say. "I guarantee most of the people in MoonMoon's chat feel a connection with him, but I doubt its at this level where they are going to aggressive or angry if MoonMoon doesn't acknowledge their sub or forgets their name or doesn't see every message. But that does happen and that's an equally toxic thing."

Dr. K has worked with a fair number of streamers, and it shocked him to learn that many streamers don't get to do things that ordinary people get to do. For example, when a person's parent passes away, they get the opportunity to grieve with close friends and family. However, a Twitch streamer or YouTube will probably have to give their audience an explanation for their absence as they go through the grieving process.

Seán McLoughlin aka. Jacksepticeye found himself in this exact situation after his father passed away in January 2021. "It's a thing you have to tell people that it happened", says Seán. "But at the same time, you want to keep it a bit more private, because I need to let people know not to go poking when I disappear for three weeks, to leave my family alone, to leave me alone, and to respect the boundary of what has happened. You just need to tell people upfront instead of leaving any ambiguity in the air because, from my experience, that just makes things worse."

"I need to let people know not to go poking when I disappear for three weeks, to leave my family alone, to leave me alone, and to respect the boundary of what has happened. You just need to tell people upfront instead of leaving any ambiguity in the air because, from my experience, that just makes things worse." - Jacksepticeye, Twitch streamer and YouTuber

It's not just the streamers and YouTubers that struggle because of parasocial relationships. Often, viewers become obsessed with these internet personalities, to the point where their entire lives become about worshipping these people. As a result, they struggle to form meaningful connections with other people in real life.

Why do People Get Attached to Streamers?

From our experience at Healthy Gamer, most parasocial relationships form because people turn to Twitch to fulfill an innate human need for connection. Most of the time, these people don't feel comfortable forming authentic relationships with people in real life. They feel like other people will judge them, laugh at them, see them as stupid or even inadequate.

A lot of these feelings come from past traumatic experiences. Children from abusive households and broken homes learn early in their lives that they get hurt when they try to interact with other human beings. As a result, their mind learns to avoid interacting with other people. However, they are still human and still have the desire to form connections with other people.

That is where Twitch comes in. Twitch allows them to experience what it is like to have a friend without the possibility of getting hurt. They can interact passively with the chat, and the streamer or YouTube can carry the brunt of the interaction. They never feel stupid because they don't have to say anything. They never feel judged because they are just a name on the streamer's screen. They can share their deepest hurts and their deepest desires under the protection of anonymity. It is the perfect relationship.

Viewers stay at home and become intensely invested in these famous people's lives. Their lives seem more attractive than their own. They get entertainment and connection: it is the best of both worlds. Often, these viewers lack purpose in life, and this engagement with streamers helps to cover up their existential dread.

In some instances, these viewers start to live vicariously through these Twitch streamers and YouTubers. They are over the moon about the streamer's successes and devastated for their failures. Additionally, when two streamers clash, their communities start to go after each other aggressively. These disagreements and internet drama feel like attacks on their tribe, which is too painful to bear. They defend their favorite streamer because they consider them to be their best friend. A lot of inter-community toxicity arises because viewers are highly attached to their favorite streamer.

If you have problems in life and have healthy real-life relationships, you would most likely go to those relationships for support. However, many viewers on Twitch don't have that. Unsurprisingly, a survey done in November 2020 found that live streams on Twitch help viewers cope with difficult periods in life. Therefore, it makes sense that if you are going through a difficult period in life, and you make yourself feel better by spending time with an internet personality for most of your day, you will likely develop a bond with that personality.

How Do You Know if Your Relationship is Parasocial?

To determine whether you have developed a parasocial relationship with a streamer or YouTuber, you can ask yourself these questions:

How to Stop a Parasocial Relationship?

If you have been using Twitch and YouTube to meet your social needs, then the first thing you need to do is to recognize that it will not be easy to retrain your mind. If you grew up not eating spicy food, it wouldn't be easy to acclimatize to eating it. In the same way, your brain needs time to adjust to real-world relationships, so be patient with yourself. Recognize that it is difficult and you will not enjoy the process much, and at the same time, it is one step closer to the life you want to live.

Ask yourself the following questions:

You need to answer these questions first to stop parasocial relationships. These questions will help you recognize the need that is being met by watching Twitch. Moreover, when you feel the need arising in the form of emotion, don't try to rationalize yourself out of it. You have an emotional need that gets met by watching Twitch, so recognizing and becoming aware of it is crucial to overcoming it.

Once you bring awareness to the need, it will become easier to form fulfilling relationships in real life. If you stick to the process and get help by signing up for coaching, then the need to form parasocial relationships will go away on its own.