Which Coaching type is right for you?
Take the quiz

Why do Video Games Make You Angry? 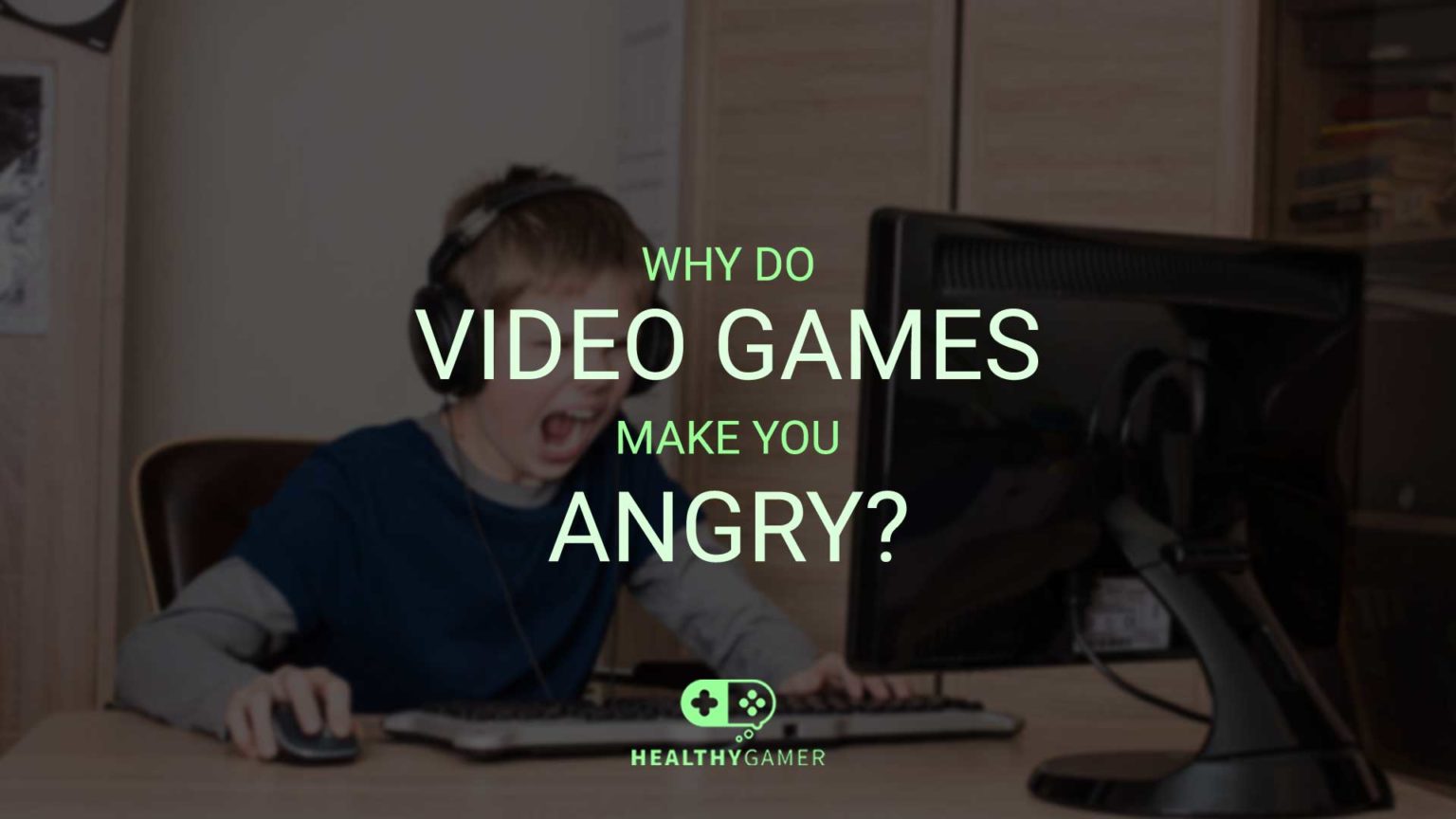 Gamer rage is not a new phenomenon. A gamer angrily throwing down their controller after losing is a classic image that comes to mind. Since the gaming community has become quite toxic over the last few years, it begs the question: why do video games make people angry?

Here are a few reasons video games make you angry:

If you are concerned about someone's relationship with video games, take this quiz to understand their relationship better:

Let’s look at each of these in more detail, as these reasons can apply to most gamers. At the end of the article, we also discuss solutions to video games making you angry.

Moreover, constant suppression also prevents the amygdala from making connections to the hippocampus, which is the part of the brain responsible for learning. That prevents gamers from learning lessons, which makes their progress at the game slower. That leads to more frustration, which gets vented out at the game or their teammates.

However, these emotions don’t dissipate. They stay suppressed and swimming under the surface. When we experience an adverse event in a game that causes frustration, those emotions find an outlet. Due to reasons that we will get into in the next section, these suppressed emotions manifest as anger.

Video Games can Cause Alexithymia

Emotional suppression is a massive problem in the male population. In our culture, boys are taught that anger is the only acceptable emotion for them to express. As a result, many men grow up without having the emotional vocabulary to express their feelings.

Video games can make this issue worse. As a result of emotional suppression, people start to lose the ability to know their emotions. This condition is called Alexithymia — the inability to determine your inner emotional state. Most gamers are alexithymic.

When a gamer who plays games to escape their real-life problems encounters a situation in the game where they start to lose, the feeling of failure that they have been trying to escape starts to bubble up again. They begin to become frustrated and annoyed that even video games are failing to help them.

That activates their ego. The ego is a protective mechanism that arises to protect us from emotional pain. When a gamer starts to feel like they are a failure while playing competitive games such as Dota 2 or League of Legends, their ego gets activated. It creates a narrative that they are not the failure, and its not their fault that they are losing at the game. The gamer’s ego tells them that it is their teammates’ fault that they are losing. Video games don’t have to be violent to trigger gaming rage.

Their brain then does some hyper-selective reasoning to find evidence to back up their narrative. The gamer proceeds to let off some steam by shouting at their teammates in the game. In this way, their ego protects them from emotional pain and redirects their emotions towards other players. The gamer might think that video games make them angry, but it is their ego stepping in as a defense mechanism.

Different Goals create a Conflict of Interest in the Video Games

One of the biggest reasons that gamers tend to get angry towards each other in video games is a conflict of interest. Different players approach video games in different ways. One gamer might want to play a game for fun, while another gamer’s goal would be to win and ascend in rankings. One player might be more casual while the other might be more competitive.

When these two kinds of players land up on the same team, there is a clash of objectives. While winning can be fun, if you get too engaged in achieving the goal of winning, then you might see the casual player as a problem, as they are not trying hard enough to win the game. That can make you angry because its frustrating to meet someone who isn’t playing the game with the same goals.

If you are the casual player and you don’t mind losing, the competitive player might get angry at you because you are actively impeding their progress in the game. If you respond angrily, then that results in a back and forth where two players become tilted and perpetuate toxicity.

Prevalent Toxicity in the Gaming Community

People raging at each other in games is a common sight. When a new player enters these communities, they quickly learn that they have to be equally toxic to survive. As a result, toxicity and rude behavior get normalized.

Many gamers think that their speech does not cause any real harm. They believe that “its just words.” Everyone reinforces everyone else’s toxic behaviors, which makes the environment worse, especially for new players.

Click here to check out our article on toxicity in the gaming community.

How do I Stop Getting Angry at Video Games?

Gamer rage and toxicity is both an individual as well as a systemic problem. Therefore, we need to tackle this issue from both angles. Here is how you can understand why video games make you angry and process that anger.

Find Out Why You Play Video Games

Is it to cope with problems in real life? What do you think would happen if you stopped playing them? Answering these questions will give you an insight into your thought processes.

Talk About Your Emotions

Talk about your emotions with others and develop an emotional vocabulary. This step is crucial for long-term mental health. If you were to ask an alexithymic gamer what they feel when something wrong happens to them, they would probably answer with “I feel bad.” However, feeling bad is not an emotion. It is a blanket word that can mean any feeling ranging from “sadness, frustration, guilt, shame, regret, etc.” A simple exercise you can do is try to use an emotional wheel to figure out which emotion you are feeling at particular moments.

Process your emotions. Unprocessed emotions are one of the biggest reasons for emotional outbursts. When you don’t let out your feelings in healthy ways, they get suppressed and leak out when your guard is down. It would help to get a mental health evaluation and see if you need mental health treatment. There is no shame in asking for help.

Are You Addicted to Video Games?

Try to figure out if you are addicted to video games. See if you have any signs or symptoms of video game addiction. Gaming addiction can be paralyzing and prevent you from moving forward without you even realizing why. The frustration from being stuck can often present itself in the form of anger.

Counter toxicity in video games. Start with yourself — notice the feeling of anger when it bubbles up, and observe it. As you gain control of your anger, try to understand why other people in video games are angry. Everyone has different reasons for being toxic in video games, even if there is a common theme. Moreover, it is not about fake positivity. It is about understanding the cause of frustration and disarming your ego while attempting to understand your teammates.