How to Detox Your Child From Video Games 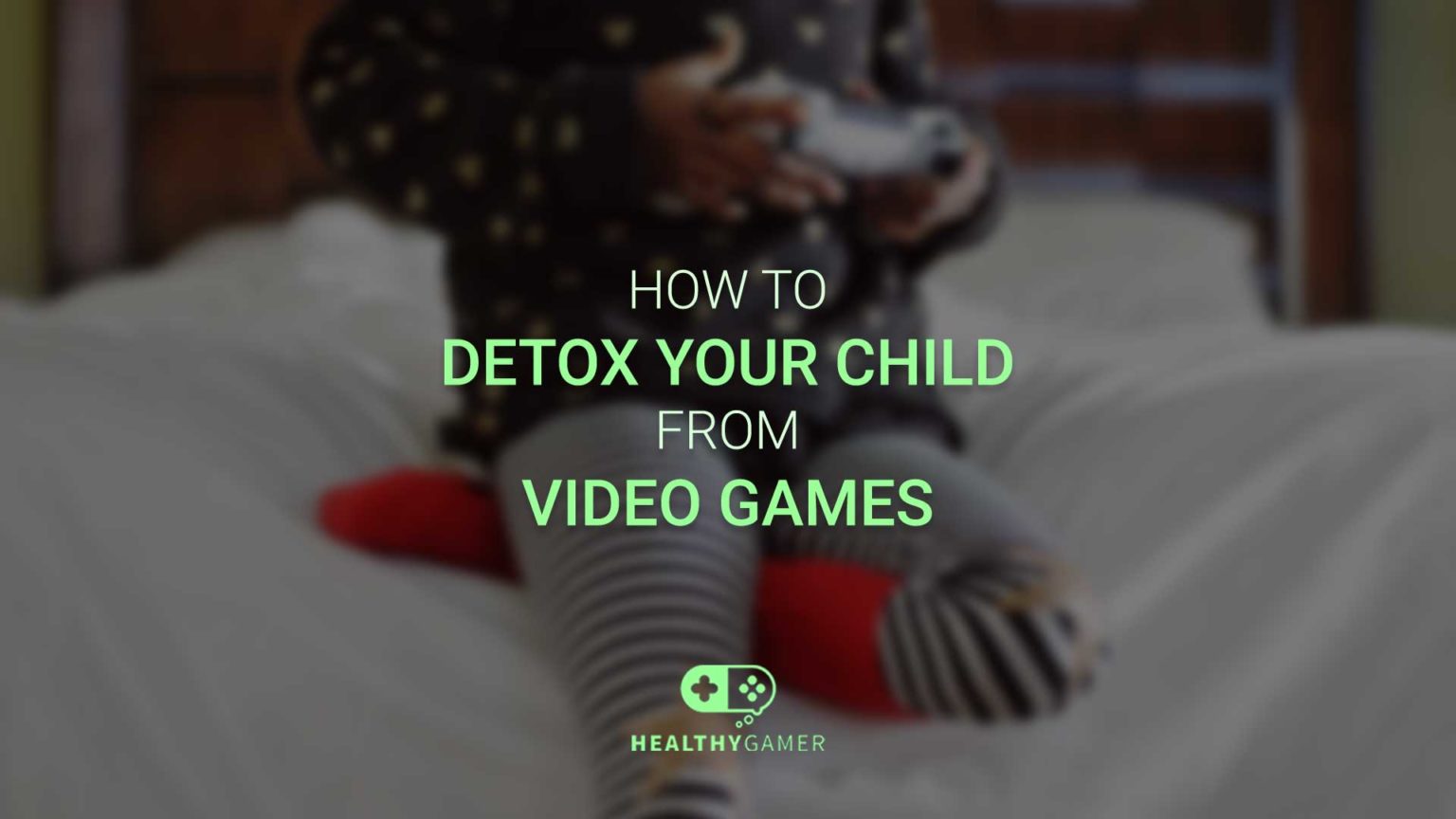 A child that shows no sign of stopping their gaming session is a fearful sight for a parent. Video games are often associated with bad grades, bad behavior at home, lack of physical activity, and a non-existent social circle. While video games are not bad themselves, excessive gaming can lead to plenty of unwanted side-effects. Thus, the question arises: How can a parent detox their child from video games?

Detox your child from video games using the following steps:

If you think your child has a video game addiction, this quiz can help you determine if that is the case:

How Video Games Affect Your Child

To learn how you can detox your child from video games, you need to understand why your child plays video games. Video games affect your child’s brain in a couple of ways:

Dopamine is a neurotransmitter in our brain that controls our feeling of pleasure. When your child plays a video game, dopamine gets released into their nucleus accumbens, the pleasure center of our brain. When the child has fun playing a video game, their brain releases dopamine continuously, with random bursts now and then.

However, over time, your child’s brain gets used to a certain level of dopamine. At this point, the game stops being as fun as it used to be. Your child feels the need to play more to have the same amount of fun as they did earlier. If this keeps going on for long periods, your child’s brain becomes desensitized to a high level of dopamine, and the game stops being fun at all. Their dopamine tolerance becomes so high that their brain reaches the point of dopamine exhaustion.

It translates over to other areas in life. When your child had fun playing video games, it was hard to get them to do anything else. Once their brain gets desensitized to the dopamine from the video game, other activities become out of the question. Your child’s brain is so used to that level of dopamine that even a few minutes of idleness can be excruciatingly dull.

Check out this video on how gaming affects dopamine reward circuitry:

As a result, video games are a great coping mechanism for children going through difficult situations. These situations could include bad grades at school, bullying, isolation, and even toxic home environments. It is crucial to recognize what video games do for your child emotionally. Emotional suppression is one of the reasons for bad behavior in children. They don’t know how to process their emotions, and video games suppress them further. As a result, they might lash out with anger when they feel that you will take their video games away.

Click here to learn more about whether video games cause bad behavior in children.

The triumph circuit is not as directly mappable onto the brain as the dopamine circuit, since its not a physical circuit in the brain. It is more of a psychological pattern that exists in all human beings. In evolutionary biology, there is a story of venturing into the unknown, conquering something, and returning to your tribe with a prize. As a society, we value people who do challenging things and come back with something that improves society. That is the essence of the triumph circuit.

The triumph circuit is activated when we engage in a challenge and get something out of it. Video games have found a way to hack this circuit. We can use video games to trigger the triumph circuit on our terms. That means that we no longer need to go out into the world and do hard things. We can just turn on a video game and feel challenged and engaged.

Studies have shown that children crave challenges and mastery. That is why they get drawn to video games. Moreover, children who are not adequately challenged or stimulated in school are attracted to games even more. In school, every child progresses at the same pace. However, children with above-average intelligence don’t have to wait for their peers to catch up to them in a video game. They can move on to the next level immediately when they beat the previous one.

As a result, children get sucked into the world of video games. However, over time, they can become reliant on video games for the feeling of being challenged. Why would they try to do well at school when they can get the same feel from video games much quickly?

Dr. K talks more about the triumph circuit in this video:

Get on the Same Page With Your Child

The most important thing a parent needs to do is get on the same page as their child. Ask your child the following questions:

What video games does your child play? Why do they enjoy it?

The goal of asking these questions is to understand your child’s motivations for gaming. If your child feels defensive because they think you will take away their games, they will not be able to open up to you. If there is tension between you and your child, it might be beneficial to skip the questioning for now.

Instead, ask your child if it is okay if you sit near to them while they play. If they say yes, then great!. Don’t ask them questions, don’t demand their attention, simply be close to them. Let them feel comfortable around you. You can even read a book while they play their games. However, if they say no, respect their decision and give them their space. Perhaps they feel too defensive, and engaging with them when they are defensive would form a negative association around your presence. Over the next few days, try asking them again. Only ask them once per day, and if they say yes, just be around for 15-20 minutes.

As they get comfortable with you being around and don’t feel as defensive, ask them some easy questions about the games they play. The goal here is to understand what games they enjoy and why they enjoy them. If they don’t have an answer to your question, it is okay. The goal is to cultivate understanding and negate tension.

Over time, build rapport with your child. Cheer for them when they win a match of Fortnite, or whatever game they’re playing. Your child must see you as being on the same team as them. Most problems arise when children think the situation is “child + video games vs. you.” You want to dispel this idea in their mind. However, this is a slow process, so patience is of utmost importance. Before you can wean your child off video games, you must build a healthy relationship. It is essential to show them that your love is unconditional, which means being there for them even if they’re playing video games.

Implement a Strategy to Detox Your Child From Video Games

It is vital to have a plan when you want to detox your child from video games. There are several reasons for them not to play less. It is necessary to recognize that as a parent and be patient when implementing this strategy. It is safer to go slow than to go too fast.

Here is a sample strategy you can employ over weeks and months to slowly wean your child off video games.

If you need a more actionable strategy to detox your child from video games, our family programs can help. Click here to check out our Parent’s Course to learn how to build a rapport with your child and slowly them regain balance in their life.